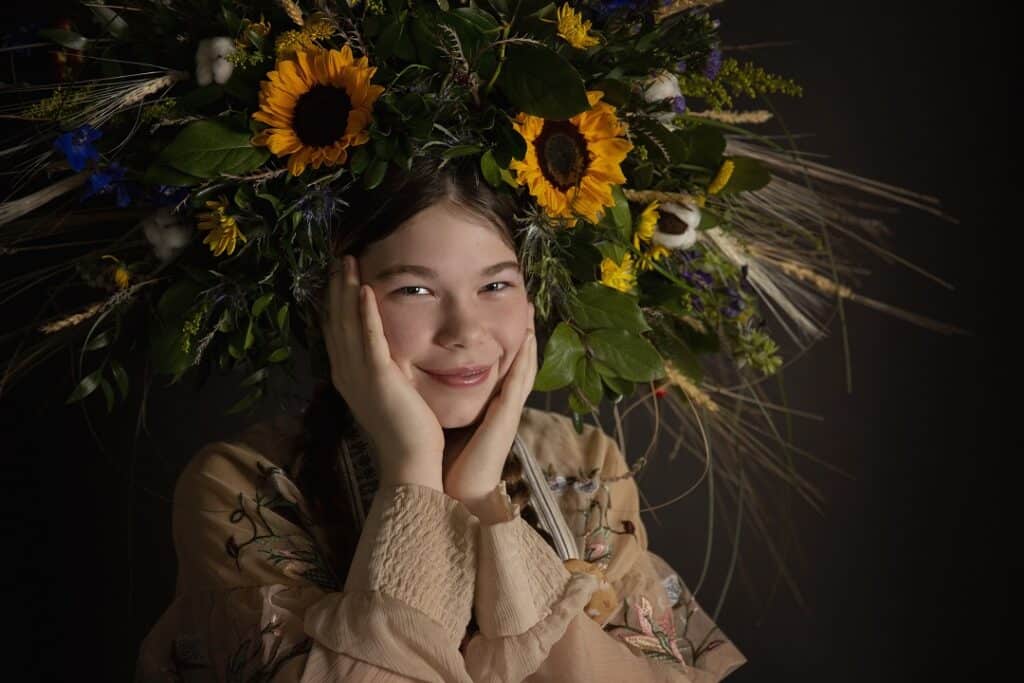 The ongoing conflicts and humanitarian crisis happening in Ukraine has made us more aware of the country and its people. It has made many of us feel obligated to learn more about the Ukrainian people and their culture. In our efforts to learn more about the history and culture of Ukraine, we learned about the vinok, a beautiful flower wreath worn by women eligible for marriage.

Here we share with you what we learned about this culturally significant headdress and present to you our representation of these beautiful flower wreaths.

A Brief History of the Vinok

The word vinok originates from the word vinchannya, which means wedding ceremony. A vinok is a traditional Ukrainian flower wreath that was historically worn as a headdress by young women who were eligible for marriage. This tradition dates back to pre-Christian times, and it was believed that the headdress would protect young women from evil spirits.

The day of Ivan Kupala, known as Kupala Night and Ivana-Kupala, is a traditional Slavic holiday that is celebrated on the shortest day of the year according to the Julian calendar. On this day, you women would place their vinok in the water with a lit candle. Their romantic future would be predicted based on what the candle and vinok did.

A group of young men would stand across from the women. The direction of the wreath’s movement would tell the girl who she would marry. If the wreath did nothing, the young woman would not marry. If it went under the water, she would die. If the candle went out, she would be followed by misfortune. The men would dive into the water and try to get the wreath of the girl they wanted to marry.

Once a girl married, her vinok would be replaced by an ochipock or povoinik, a headdress worn by only married women. This headdress is a cap with decorative embroidery that covers the women’s hair, forehead, and ears completely. Female friends of the bride would be adorned with beautiful flower crowns as well. These crowns were often made by the women themselves on the day of the ceremony.

While it is no longer a tradition for women to leave their fate of marriage in the hands of what a wreath and candle does in the water, the vinok remains a national symbol of girlhood and is still part of the Ukrainian national attire. It is commonly worn to festivities and on holy days. The vinok has also been increasingly worn by women in everyday life since the 2014 Ukrainian revolution.

Traditionally, a vinok is made with fresh flowers, paper, and wax attached to a firm paper backing covered by a ribbon. Depending on the region of Ukraine, the vinok might include grasses, feathers, ribbons, yarn, and coins. Regardless of what the headdress included, they all represent the same symbolic meaning.

A vinok can have as many as 12 different types of flowers. Each type of flower and grass has its own meaning.

• Lilies are a symbol of purity and elegance

• Daisies relate to peace and tenderness

• Peonies are a symbol of longevity

In a traditional vinok, different colored ribbons were incorporated into the headdress. Each color represented something significant in the Ukrainian culture, and the ribbons were always cut lower than the girl’s braids. The main, centralized ribbon was typically light brown and was meant to be a representation of the land and soil. Yellow ribbons symbolized the sun, while light and dark green ribbons represented beauty and youth. Blue ribbons were a reflection of the sky and water that gave strength and health. Orange symbolized bread, violet related to wisdom, crimson was for truth and security, and pink was a symbol of prosperity.

White ribbons were only used if they were embroidered with gold and silver. Ribbons without embroidery were not used as they commemorated the dead. Red ribbons were used to intertwine poppies and are a symbol of magic and grief.

Our Representation of the Ukrainian Vinok

We are inspired by the Ukrainian people, their history and strengths, and recognize the struggles they are currently experiencing and those they have went through in the past. To spread awareness of their culture and pay tribute to the people of Ukraine, we have put together our own flower wreaths. We hope you enjoy our creations and do what you can to support Ukrainians through this time of turmoil.

As Battle Creek’s only independent locally owned florist, we strive to help spread love through flowers in our community with floral arrangements unmatched in quality and detail. Together we can all help Battle Creek Bloom!

Our beautiful fresh flowers are arranged daily by our professional florists ensuring the freshest, longest lasting blooms in your bouquet.

We make sending flowers easy! You can order your floral arrangements online from the comfort of your home or office 24/7! We even have same-day flower delivery for most flower arrangements.

Whether you’re sending happy birthday flowers, happy anniversary flowers, funeral and sympathy flowers, or flowers “just because,” Plumeria will provide the most beautiful floral arrangements perfect for the occasion.

We deliver flowers to the following hospitals in Battle Creek & surrounding areas:

We deliver flowers to the following funeral homes in Battle Creek & surrounding areas:

We deliver flowers to the following towns & cities:

We deliver flowers to the following zip codes in Battle Creek & surrounding areas:

We are affiliated with the following professional organizations:

We are NOT affiliated with Teleflora, 1-800-Flowers, or FTD.